Directing and training a team of developers, coordinating with producers and the science team to validate proposals and ensuring smooth releases across projects.
Leading development in the interactive department and enforcing standards; using using my broad programming knowledge to build robust, clean and modular codebases for production projects and application templates for other developers to expand upon.

Developing interactive applications in Unity / C# with the occasional Node / Javascript / Three.JS / AFrame project, with a particular focus on Virtual and Augmented Reality, including development for the Microsoft Hololens, HTC Vive, Oculus Rift / Go & GearVR.
Developing and maintaining the production pipeline, creating tools which are now a core part of Random42’s technical infrastructure and constantly striving to improve production workflow.

Developing and maintaining the production pipeline, liaising between different departments, providing solutions to technical problems and increasing the overall efficiency of the studio.

I like to focus on the technical side of projects, finding elegant ways to architect applications, building modular and reusable components, automate redundant tasks and figure out how to make things better and faster.

Minimalist at heart, more is not always better. Man of arts inside, former member of acting classes, theatre companies, dance courses. Extrovert and sociable, great team member. Blunt by British standards, but hey - it gets things done. Fitness junkie and health enthusiast, yet lover of good food, and of course good company.

Moved from Italy to the UK after high school to study Computer Visualization & Animation at Bournemouth University, home of the National Centre for Computer Animation in UK, and loved every minute of it (even during the long nights). Currently working in London.

Think we should chat? ✉ me at impeto.blu(at)gmail(dot)com

I strongly believe in pursuing personal projects during part of one’s free time. Here are a few of mine.

Some of them are small, some are big.
Some of them suck, other suck just a tiny bit less.
Most of them were made using something which at the time scared me a fair a bit - after finishing it, not so much.

But all of them taught me something.

For more open-source tools and experiments, check out my github

De Planeta (latin for about a planet) is a short and stylised procedural animation that revolves around birth, life and death of a familiar little planet, showing all the colorful wonders it has to offer by following it through the ages with a fast-paced and engaging rhythm, culminating into the triumph of modernity over nature, with all the consequences that may follow upon it...

De Planeta was my final year Major Project at the Undergraduate Computer Visualization and Animation course at the NCCA. A single soul’s opera magna created entirely in Houdini, with compositing in Nuke.
Curious about how De Planeta was made? Download the Project Report, a 45-pages “making of” document that outlines the development process.
Screened at 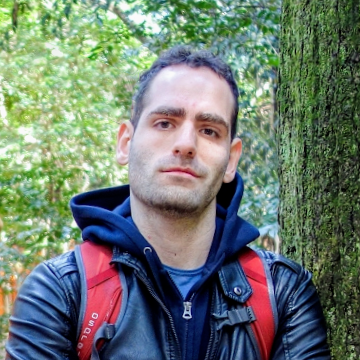 I like to focus on the technical side of projects, finding elegant ways to architect applications, building modular and reusable components, automate redundant tasks and figure out how to make things better and faster.

You’ll usually find me working on a personal projects or some experiment on the side - I might not know the meaning of life, but I'm pretty sure that creating ranks higher than consuming on the cosmic scoreboard.

Built in a 🗲 with imml